December 2021 – Message from Our Artistic Director

Music Connects Us.
Notes from our Artistic Director
~ December 1, 2021 ~

STIR-UP SUNDAY
Have you ever heard of it?  Neither had I until I started rereading The Christmas Chronicles, day-by-day diaries of the British food writer, Nigel Slater, as he prepares for Christmas and Hogmanay, including the tradition of making a plum pudding on a Sunday before Advent…Stir-up Sunday.
Well, last Sunday was Stir-up day in our household even though it meant taking a break from the filming sessions we’ve been undertaking for A Huron Waves Christmas.

Huron Waves’ 2021 video arrives on your screens on Sunday afternoon, December 12, via a number of platforms including Huron Waves’ Social Media channels; several local cable stations; and the Huron Waves website.  To perk your interest, here’s a preview from some photos shot at the various filming sessions.

To represent both our wider region of Southwest Ontario and the traditions of sacred, seasonal, choral music, the Kammerchor London octet will sing Handel’s famous Hallelujah Chorus from the Messiah and a beautiful seasonal anthem, This Blessed Morn, by the early 17th century English composer, Orlando Gibbons. 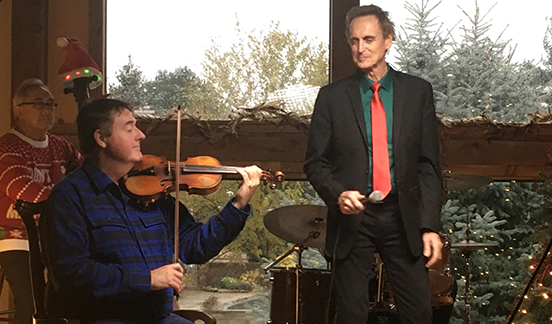 Could there be music more appropriate for Huron County, or more varied in its style, than Christmas country renditions featuring Frank Leahy playing Don Messer’s original violin?  Joining the ensemble for the filming at Peckerwood Farm in Hensall were three of Frank’s backup colleagues and his vocalist, Neil Donell, who flew in from Las Vegas where he’d been on tour as lead singer of the great American rock band, Chicago. 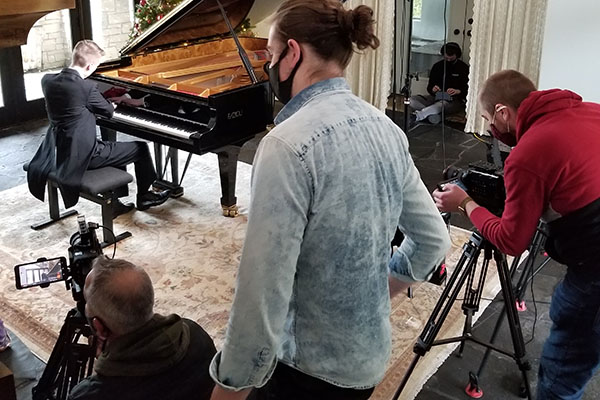 Classical music is represented by the young Goderich pianist, Hugo Russell, who plays two demanding keyboard classics by Frédéric Chopin and Alexander Scriabin, both composers and pianists themselves and thus masters of challenging scores that Hugo performs vigorously. 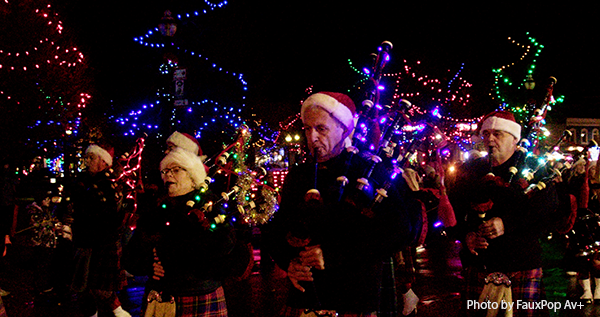 What would a holiday program be without the music of a Santa Claus parade, and that’s where we’ve called upon the Clinton Legion Branch 140 Pipes and Drums.  Watch for them in Zurich and Goderich, wearing their Santa hats and adding the skirl of the bagpipes to our Celebration video. 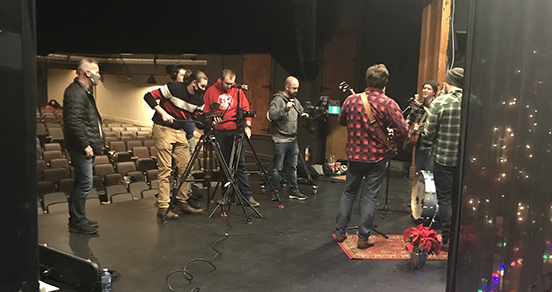 From the original cast of the December, 2019 Blyth Festival hit, A Huron County Christmas Carol, four gentlemen actors including Artistic Director Gil Garratt are reviving some of that show’s original songs. This segment will be a great reminder of what the Blyth Festival brings through music, as well as dramas, to Huron County and to its thousands of patrons from across Ontario. 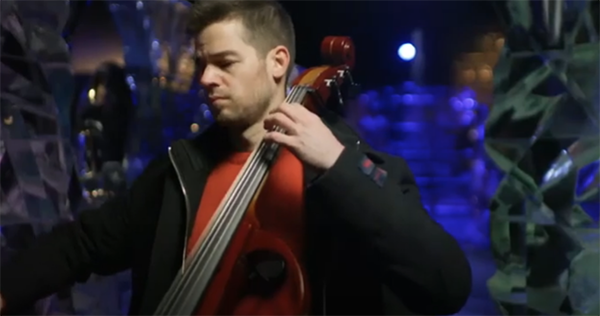 Still to be filmed this month will be the beautiful duets for cello and harp presented by Thomas Beard, seen here in a setting from the 2020 video, and his sister, Emily, from Wingham. My prediction is that Thomas will bring along another unique arrangement similar to the Huron Carol he arranged for multiple audio tracks in last year’s Celebrate the Holidaysprogram.  Accompanying their selections will be Bonnie Sitters’ sublime photographs of winters in Huron County.

So, mark your calendars for Sunday afternoon, December 12, for the premiere of
A Huron Waves Christmas, hosted by Julie B from Wingham radio’s 101.7 The One.   Then, help us spread the word as the program continues throughout December, into January, and beyond in 2022, on YouTube, Facebook and our own website, www.huronwavesmusicfestival.ca .

Still short of a gift or two for the holidays?  May we suggest the jigsaw puzzle, a Huron Waves fund-raiser, that seems already to be a hit, for some because of its pleasure in putting together the 308 pieces, for others because of its beautiful image of the sunset over Lake Huron, and for others simply because of its appealing $20 price. 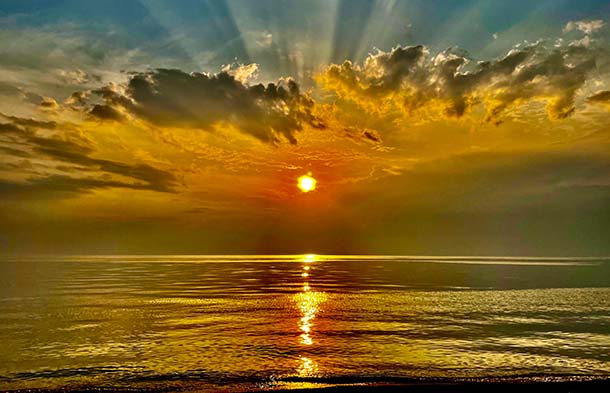 Puzzles are available from Huron Waves Music Festival Board Members and local businesses in Huron County and Stratford.  You can also email.  info@huronwavesmusicfestival.ca to inquire about where you can pick up yours or have one mailed to you in time for the holidays.

To begin this newsletter I wrote about Stir-up Sunday when each person in the family takes a turn stirring the plum pudding and then the house steams up because the beauty is on the stove for hours and hours.  To close this newsletter I’d like to share with you a very personal pleasure that comes from my Scottish heritage and my childhood memories, a tradition continuing in our home to this very day.

Almost a century ago, my dear Aunt Kate was a fabulous cook and baker whom I fondly remember every time I see Mrs. Pudmore on Downtown Abbey.  Aunt Kate toiled in the Hamilton residence of a First World War general who had led Canadian troops.  I still have 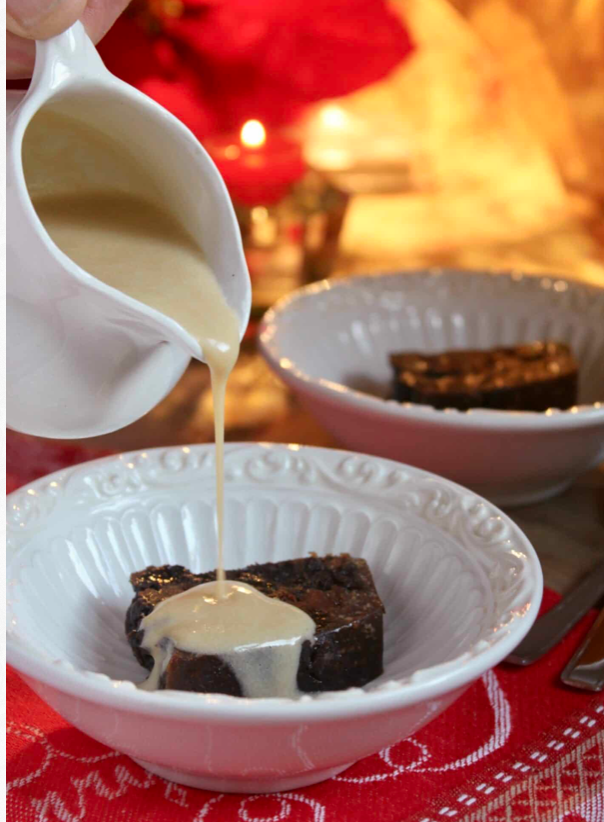 many of her homemade recipes including a raspberry cordial, a wassail bowl, a clootie dumpling, a tomato cocktail marked as the traditional recipe from the Molson Family of London, and a pudding sauce whose ingredients every guest wants to have when I serve it to complement our pudding each December 25.

I’ve never distributed the recipe beyond a few friends but as an appreciation to all of you who have followed with me on the challenging journey for Huron Waves this year, here it is.  It comes with my hope that some of you might just try it…and enjoy it…just as I trust you will soon watch…and enjoy…the Huron Waves video honouring talent and traditions at Christmas in Huron County.

Aunt Kate’s Sauce
In a pot off the stove, cream a half cup of soft butter. Add, and beat well, 2 cups of brown sugar. Add 1 tblsp flour.    Gradually add, very slowly, 1 cup of boiling water.  Stir continually as you put pot on stove. Bring to boil.  Lower heat.  Patiently keep stirring to cook the flour till its whiteness disappears.  Remove from stove.  Let pot sit till it goes off the boil.  Add 1 glass of brandy.

Till we’re together again next year, stay safe and healthy.  And remember that especially in the holiday season, Music Connects Us.